an Isles and West novella

Boston is on its knees: one hundred sixteen infected, eighty-two dead. There is no sign that the attacks from the Dark will stop anytime soon.

In training with the FBI’s Reaper Team, Delilah Dalton and Milly Shores—two nineteen year olds with gifts to deal with the dead and the Dark—are caught up in the gruesome case. A case that will push their abilities to the limit.
If the team can’t stop the killing soon, South Boston will be nothing but a blood-drenched feeding ground for dark beasts.
*****
Over the River

available in print on Amazon

Down a snowy dirt road, in a farmhouse filled with death and fear, there is a woman…

The Weatherby Mills history books paint Joslyn Faust as a kind and generous woman who was willing to help any of her neighbors in need. Weatherby Mills lore, however, holds her ghost responsible for the deaths of four men.

Delilah Isles knows all the legends of the tri-towns: from the friendliest and nastiest of ghosts, to the dangerous and terrifying beasts and beings of the Dark and Glory. So when the case of the Faust Homestead lands on her desk, she is both intrigued and skeptical.

Working for the New England Spirit Society, she and her partner, Milly West, have seen spirits and non-human entities commit many brutal attacks. After all, the N.E.S.S. only investigates the most violent and disturbing cases. However, even with the four assaults contributed to Joslyn Faust, Delilah isn’t certain the case is truly N.E.S.S. material. That all changes the first time she and Milly set foot on the Faust property and witness firsthand just how vicious the celebrated townswoman’s spirit can be.

available in print on Amazon 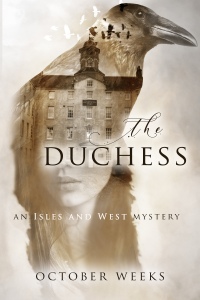 A high ‘Lady of the Court’, that’s what one newspaper called the large stone building that had once housed prisoners no one else wanted—the mentally and physically ill. That’s how it became known as The Duchess. It was meant to be a safe place for the patients, who were both gifted and non-gifted. But something went terribly wrong. Angry spirits attacked the living and many died within the stone walls before it was closed down.

The newest owner wants the building cleansed of the darkness. She calls in Delilah Isles and Milly West to do the job. It doesn’t take long for the two gifted women to realize that something is exceptionally Dark at The Duchess. Abuse of both the mentally and physically ill is ripe in the air and both of them see and feel the damage done to those who dwelled within the building. Abuse that was still happening to the ghosts trapped inside. The more they dig, the worse their findings get.

Their client is giving them three weeks to do the job, but they soon realize they have far less time than that. The dead and the Dark won’t leave easily, and they will stop at nothing to finish what they started in life.

available in paperback on Amazon

It all comes down to this…

Delilah Isles has been waiting for the Tay family to make their move, and when they do the cost is a heavy one. They attack the young daughter of a close family friend, which forces Delilah to go up the mountain and start the investigation that has been two centuries in the making.

The Tays have been planning the moment of battle since their deaths, and Delilah knows that she and Milly won’t be able to fight the Tays on their own. But calling in backup brings unexpected consequences. Consequences that Delilah could never have imagined.